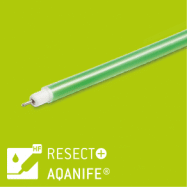 Use of the Traction Polypectomy Snare

Application of the Traction Polypectomy Snare

Injection into the submucosa

Positioning of snare and OTSC® Anchor or FTRD® grasper

Elevation of the lesion and snare closure

*Note: Anchor needles must not be captured with the snare during the push-back move. If in doubt, the anchor needles can be closed to avoid a short circuit.

Excerpt from the summary:

„In this experimental study a new snare with special teeth (Traction Polypectomy Snare) attached to the distal part of the wire loop was evaluated and compared to a conventional snare. 70 artificial sessile tumors were created in a standardized manner in a porcine ex vivo colon. 35 flat polyps were resected with the new serrated snare, whilst the other 35 polyps were removed using an identical snare without teeth. The weight measurement of the resected polyps showed that using the new serrated snare 31% more tissue could be removed with a single snare resection in comparison with the conventional snare without teeth (mean 454 mg vs. 347 mg, ±202 mg vs. ±165 mg; p = 0.017). The teeth obviously increased the effectiveness of snare resection by avoiding the accidental loss of entrapped tissue from the loop. The new snare will facilitate the removal of flat polyps and reduce the number of specimens during piecemeal resection to a minimum, allowing a better histopathological assessment.”

To the media library

Other products of the product family RESECT+